The latest version of Adam AI is the fastest and smartest currently available! The forefront of AI chat is now available completely free to download! 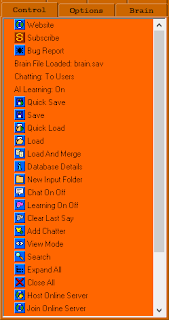 Version 1 to 4 had bulkier save file, slower response time, and was more intensive on the CPU and RAM.

AIChat/Adam AI Version 5 shrinks save files 20x smaller, and reduces CPU and RAM use 100x, making the AI faster and easier to run than before, without the loss of intellectual response.

Previous to version 5, the AI created lots of files in the brain tab, in version 5 and in future versions, rather than creating a file for every response, every file will have a weighted count to see how many times something has been said, this is one of the major reasons the new save files are up to 20 times smaller.

The new talking time button can add realism in the form of an artificial delay based on reading and writing time to respond, but when turned off the responses are a lot faster, the new save files also give an index to make searching for responses even faster.

The modern save files are forward and backwards compatible will all the versions available on the website, no matter what version you are using, it is able to load in any version.

AIChat/Adam AI V5 has also been redesigned to give smarter responses, even with small human errors the smart indexing system is able to short hand information in a round about way without losing the main substance of the information, and is also able to ignore minor errors, like pressing the space bar twice.

Some of the new features in AIChat/Adam AI V5: